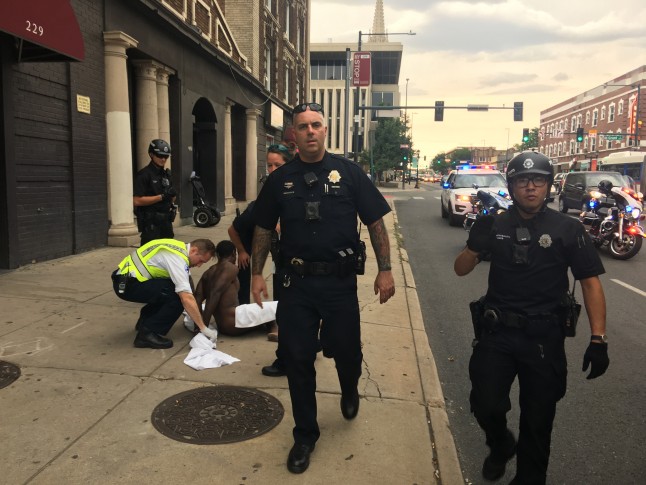 Imagine what would happen to you as a regular citizen in the following circumstances. You do not like a woman photographing a public incident, so you demand that she stop. When she declines to stop, you grab her arm and twist it, physically restrain her, and forcibly put her into the back of a car.

Assuming a police officer witnessed the event or arrived at the scene after the fact, we all know what would happen to you as a regular citizen. You would be arrested and charged with multiple crimes. In Colorado, the district attorney probably would charge you with third-degree assault, “knowingly or recklessly caus[ing] bodily injury” (CRS 18-3-204), as well as with false imprisonment, “knowingly confin[ing] or detain[ing] another without the other’s consent and without proper legal authority” (CRS 18-3-303).

But what happens if the person doing the grabbing, the arm-twisting, the restraining, and the detaining happens to be a police officer, one who had no legal authority to do any of those things given the circumstances? Is that officer subject to the same criminal statutes that apply to the rest of us, or is the officer above the law, “more equal” in the eyes of the law than everyone else?

We are about to find out.

Here is what happened. On July 5, Susan Greene, editor of the Colorado Independent, “was driving on Colfax and wondered why police were standing around a man they’d handcuffed and had sitting butt naked on the sidewalk without taking efforts to at least cover him up” except for with a small towel, Greene writes. Greene was particularly interested in the matter, she relates, given that she is a journalist who writes about criminal justice issues and given that Denver police and sheriff’s deputies have a history of abusing (and even killing) people under their control.

Then, judging from Greene’s account, the officer told a bald-faced lie (unless the officer wishes to claim the George Costanza defense), claiming that, by photographing the scene, Greene was violating the HIPAA rights of the person being detained.

So Greene did what any decent journalist would do. She writes: “I decided to stop talking and to start shooting photos of this particular officer using his height and weight, his Denver Police uniform and his Cracker-Jack-brand legal poppycock to try to intimidate me.”

What happened next  is that Officer Brooks allegedly assaulted and falsely imprisoned Greene. At least, that is what we’d say happened if we were talking about a regular citizen and not a police officer who apparently feels little need to obey the Colorado statutes that apply to everyone else.

As it turns out, Officer Brooks didn’t like having his picture taken. After accusing me of blocking the door of an ambulance that had been called to the scene—toward which he had prodded me during our encounter—and saying something about me obstructing officers, he grabbed me and twisted my arm in ways that arms aren’t supposed to move. At some point in the blur, either he or [another officer] locked one or maybe two pair of handcuffs on my wrists, tightly, and pushed me toward a nearby police car by grabbing my arms hard enough—and with a painful upward thrust—that I told them to stop hurting me. Their response: That I was hurting myself by resisting. But I wasn’t resisting. Not even close.

Astonishingly, while Officer Brooks was busy assaulting and falsely imprisoning Greene, allegedly (or so we’d say if Brooks were a but a regular citizen), either Brooks or another officer had the audacity to tell Greene that she should “try to act like a lady.”

Perhaps the Denver Police Department can issue a helpful guide explaining to ladies and others precisely how they are supposed to act when they are assaulted and falsely imprisoned by a Denver Police officer (as we’d put it if police officers had to follow the same laws that apply to everyone else) and when their First Amendment rights are violated by the police.

It has apparently occurred to someone at the Denver Police Department that maybe assaulting and falsely imprisoning journalists, allegedly (or so we’d say and etcetera), isn’t such a great idea. By July 6, the department had opened an internal investigation into the matter, the Independent reports. (See also additional coverage by Mike Littwin, the Colorado Freedom of Information Coalition, the Associated Press, and 9News.)

Might the Denver District Attorney’s office consider filing the charges against the police officer in question that, we all know, it would not hesitate to file against any regular citizen who had done exactly the same thing the officer allegedly did?

A spokesperson with the office related (via email):

As per standard procedure for allegations of police officer misconduct, the Internal Affairs Bureau (IAB) has initiated an investigation into the allegation, collecting evidence and any other relevant information. The District Attorney’s Office, through the Assistant District Attorney, regularly meets with IAB and reviews their investigations to determine whether alleged misconduct constitutes a prosecutable crime for which charges can be filed. That will be the process in this matter.

I will be shocked if this means anything other than “fat chance.” But we shall see.

We should note a legal qualifier regarding false imprisonment: “This section shall not apply to a peace officer acting in good faith within the scope of his or her duties.” But telling a feeble lie as a pretext for roughing up someone is not acting in good faith, nor is it acting in the cause of peace.

Any time I run into any candidate for District Attorney or Attorney General, I’m going to ask one main question: “Will you press criminal charges against police officers and other government officials by exactly the same standards as against everyone else?”

Now that I think more about it, though, it occurs to me that a good argument can be made that district attorneys should if anything be less tolerant of violent behavior by police—precisely because the police are clothed with the authority of the state and carry state-issued weapons.

Of course, whether or not the DA’s office presses charges, the police department should take appropriate action in this case. If firing the officer seems too severe, if the department finds the allegations to be true, consider that departments never would hire someone with a criminal record. So why should departments tolerate behavior that would likely generate a criminal record for anyone other than a police officer? Is the message that people can engage in criminal behavior only after they become cops?

Yesterday late afternoon Greene told me that she had filed an official complaint with the department earlier in the day. She also told me that she still has “broken skin” and “some pain” caused by the incident. (She also said that the department has declined to release the relevant police video while the matter is  under investigation.)

Some people will say that I’m overreacting. Were the officer’s alleged actions really that bad? I have two replies. First, the alleged behavior is serious. If you did to Greene what the officer allegedly did, we would all rightly think that you are a horrible person who deserves criminal penalties. So why is there a double-standard for cops? Second, how seriously are we supposed to let police officers violate people’s rights before we take the violations seriously?

Yes, Greene might have fared far worse had she been poor or black. But that is hardly a reason to turn a blind eye in this case. Maybe you’ve heard of the “broken windows” theory of policing. The idea is that by policing relatively minor crimes, police help to deter more serious crimes. I think we should view police abuses similarly. We should make a big deal out of every instance of police abuse, even if the harm is modest, partly as a way to prevent more serious abuses. A police department that tolerates an officer roughing up a journalist (for example) is far more likely to have officers who commit even more serious offenses.

Are complaints about police abuses somehow anti-cop, as some have suggested? No. Most police officers are excellent individuals who routinely put their safety on the line to protect others. Police work is a noble calling. And by demanding an end to the police abuses perpetrated by a few, we make it far easier for the good cops to safely do their jobs.

Yes, being a police officer is an incredibly difficult job. Officers have to remain professional even when dealing with truly vicious and despicable people (never mind stubborn and unladylike journalists). But, frankly, people who are not able to consistently remain professional under pressure and to uphold the rights of others just should not be police officers. End of story. Of course, departments do well to give officers the training and support they need to perform well under challenging circumstances.

Act like a lady, the police told Susan Greene. Well, fellas, she acted precisely how a journalist who happens to be a lady is supposed to act. She did her job to the best of her ability within the boundaries of the law.

Photo “with Officer James Brooks at center . . . by Susan Greene.”